Contrary to popular belief, LEDs are not lightbulbs in the traditional sense. “An electrical current passes through a microchip, which illuminates the tiny light sources we call LEDs and the result is visible light.”- Energystar.gov. Energy.gov describes LEDs as being “the size of a fleck of pepper, and can emit light in a range of colors. A mix of red, green, and blue LEDs is sometimes used to make white light.” A light-emitting diode (LED) is a semiconductor light source that emits light when current flows through it. Electrons in the semiconductor recombine with electron holes, releasing energy in the form of photons. The color of the light, which corresponds to the energy of the photons, is determined by the energy required for electrons to cross the band gap of the semiconductor. White light is obtained by using multiple semiconductors or a layer of light-emitting phosphor on the semiconductor device. The diodes are protected by being enclosed in usually a plastic case, in which to protect them from the elements, while also being far more durable and longer lasting than the traditional glass encased light bulbs.

LEDs do not “burn out” or fail. Instead, they experience ‘lumen depreciation’, wherein the brightness of the LED dims slowly over time, but the time for that to occur happens over many decades, essentially providing you with a lifetime guarantee.

Like early versions of incandescent and fluorescent bulbs, they were once far more expensive and only available in limited colors. However, since 2000, rapidly advancing technology has made them available at accessible prices, in a wide range of color temperatures, for both home and commercial use.

If you were to take a block of steel and steadily apply heat, it would begin to glow orange, transform to yellow, and with increasing temperature, eventually turn into a bright, ultra-hot blue. This light temperature is measured in Kelvin, a measurement used alongside Celsius and Fahrenheit to measure heat. Kelvin is calculated by adding 273 degrees onto the Celsius measurement for an object.

Lights with temperatures that measure between 2000K and 3000K are considered “warm light”, similar to the soft glow of a candle flame. The range between 3100K and 4500K is considered “neutral”, and comparable to natural sunlight. This temperature is often used when accurate color depiction is necessary. The Kelvin range of 4600K to 6500K is known as “cool” or “bright white”. These have an icy, slight blue tint and are utilized when particularly bright lighting is essential, such as in commercial kitchens and hospitals. Our LED lights at Cocoweb fall in the 2700K, warm light range, offering a gentle and comfortable light, whether productivity or relaxation is desired. Furthermore, with our dimmable technology, brightness can be adjusted to suit your needs and preferences. 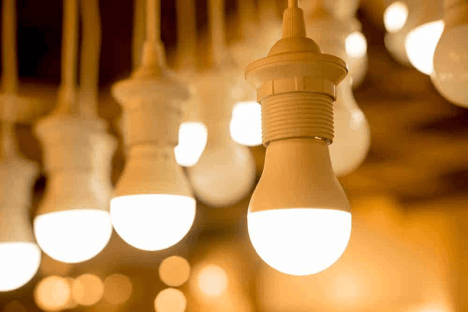 Researchers found that a string of 25 incandescent bulbs used 175 watts of electricity, amounting to $15.12 over the Christmas season. However, a comparable strand of LED lights used only 2.4 watts and cost a mere $0.21.

Not only accounting for financial cost, LED lights also take into consideration the long term cost to the environment. Many people have developed awareness of the importance of environmental conservation, and are consciously trying to protect our planet by changing their choices and priorities. LED lights produce less waste because of their longer lifespans and lower energy consumption compared to other widely used lighting options. With the development of this relatively new technology, scientists are now finding ways to create biodegradable LED lights that produce the same results, creating a more environmental friendly product.

Fluorescent lights contain toxic chemicals, such as mercury. When disposed of in landfills, this will contaminate soil. Many states have a law stating that fluorescent lights must be properly recycled. While LEDs also need to be correctly disposed of, as with all electronic items, they do not contain any toxic materials. Up to 95% of the components of LEDs are recyclable.

Unlike previous sources of light, including the sun itself, LEDs do not emit UV light, which is damaging to not only humans, but even the foods we eat. Most modern refrigerators use LED technology for illumination, keeping your perishables preserved for longer with nutrients intact.

The evolution of lighting has advanced incredibly within the last century alone, with LED lighting as the cutting edge of technology. Whether you place prominence on the cost efficacy, environmental impact, or admire the latest advancements in technology and style, Cocoweb has endless models and customizable styles to suit every taste.